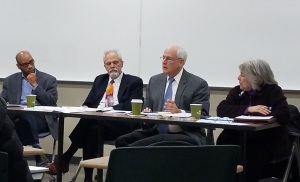 Last Thursday, March 15th, both Master of Public Policy cohorts were treated to a panel presentation examining the policy development process from start to finish. The topic at hand was the Michigan Prisoner Re-entry Initiative. This was an eight-year, public-private, evidence-based program that sought to overhaul Michigan’s parole and prisoner re-entry apparatus to address Michigan’s then-skyrocketing prison population, with the prison population peaking in 2006 at 240% of its 1980 level.

MPRI’s goal was to support returning citizens and prepare them for life outside of prison in an effort to reduce recidivism and crime rates overall. The development of the program began in 2003, saw pilot implementation in select counties in 2005, and then expanded to a full statewide implementation in 2008. According to Michigan Department of Corrections reports from the time period of 2006 to 2016, Michigan saw a decrease in the prison population of 20%, a 37% reduction in the index crime rate, and a 35% reduction of parolees returning to prison. Furthermore, 26 prison facilities and corrections camps were closed, leading to savings of $392 million due to closures and operating costs. 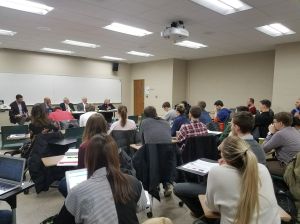 The initiative had a diverse set of stakeholders, including the Michigan Department of Corrections, the National Institute of Corrections, the National Governor’s Association, the Center for Effective Public Policy, the Michigan Council on Crime and Delinquency, Public Policy Associates (whose current President, Paul Elam helped coordinate and facilitate the event), a number of national, state, and local philanthropies, and Michigan’s major universities. Spearheading the initiative’s development were Dennis Schrantz, Jeffrey D. Padden, and Alma Wheeler Smith.

Mr Schrantz, now the Director of the Division of Training, Research, and Consultancy Services for the Center for Justice Innovation in Baton Rouge, Louisiana, was the chief deputy director the Michigan Department of Corrections at the time. He wore many hats during this time, working in concert with Mr. Padden to design, implement, monitor, and evaluate the program.

Mr. Padden is the founder of Public Policy Associates and is considered a national leader on strategic planning, performance benchmarking, and evaluation, skills particularly useful when he helped establish the MPRI with the MDOC and the MCCD. In addition to his private sector experience, Jeffrey also served for 10 years as a member of the Michigan House of Representatives, where he chaired the House Corrections Committee. Mr. Padden’s primary focus during the development of the initiative was to improve public safety in Michigan, and by all accounts succeeded.

Alma Wheeler Smith was most recently a member of the Michigan House of Representatives from 2005 to 2010, serving as the leader of the House subcommittee on corrections. Prior to this, she was in the Michigan Senate from 1995 to 2002. Her experience there proved especially useful when she later helped champion the budgetary needs of the MPRI, citing both improvements in public safety and an overall reduction in Michigan’s spend on corrections.

The event concluded with a question and answer portion with students showing particular interest in the political hurdles of the program. The speakers noted that by focusing on reducing the crime rate and costs through effective policy, they were able to gain buy-in from politicians on both sides of the aisle.